Sometimes dreams do come true, one just has to believe strong enough in them to make it happen! My very first car was a Honda Civic and after that I have been driving Alfa Romeo since. Unfortunately Alfa has discontinued their Spider so I was forced to look elsewhere to find a convertible of my liking.

Now it is no secret I have always hugely admired the Jaguar XKR, Both the coupe and the convertible. For me this is a classical example of how to combine class, sportive attitude and beauty in one car. There was only one thing stopping us from buying one which was the hefty price tag that placed it miles out of reach. The only thing left for me was drooling every time a XKR passed by. But I could live with that…

And then Jaguar presented the XC 16 at the motor show in Geneva, a stunningly beautiful concept car which was the base for a newly developed sports car, the first one since Jaguar’s legendary E-Type. It was amazingly beautiful so I was extremely curious how much of this concept car would make it to the production version. The answer was: A lot!!!

After E comes F in the alphabet and so the F-Type was born. Not surprisingly stunningly beautiful and impressive! And more important, perfect timing as we really needed to look for a replacement of my by now 13 year old Alfa156…

I was blown away by the sheer beauty of the F-Type. The first reviews coming out were raving about it so slowly but surely we started to look into whether it was feasible or not to buy one. I became a member of the F-Type circle and after intensive research and advise from a good friend we not only found out that Jaguar military Sales in Petersborough (UK) offered us the best deal but also that the F-Type was within our reach…

One question remained, will it be big enough so both of us fit in comfortably. That question was answered when, as an F-Type Circle member, I was invited for an exclusive preview at the beginning of April 2013 in Cologne, almost 2 months before the official launch date of the F-Type!

Now whilst surfing the net for hours I had seen numerous pictures and movies of the F-Type and together with Paul I had configured it several times. Nothing however had prepared me for seeing it for real. It was love at first sight! And most important, the answer to the question whether I fitted in comfortably or not was affirmative! Nothing could stop us now!

Back home Paul and I discussed my findings and we decided to go ahead and go for it. Although I had only seen the car and not been able to drive it, and the fact that Paul only knew it from pictures and videos on the internet we trusted that the driving characteristics would do Jaguar justice. One phone call and an e-mail to the UK later we had indeed bought our 340 horsepower strong F-Type.

As said, I had not driven the car yet but that would change soon as by the middle of April I received an invite from the F-Type circle to test drive all three F-Type models on the Nürburgring. How good does it get?

So on the 29th of April I headed towards the Eiffel in full anticipation of driving the F-Type for the very first time. Unfortunately Paul could not get leave so I had to make the trip on my own. 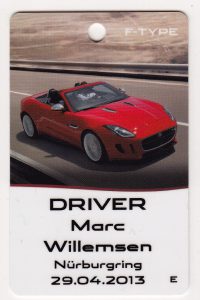 Whilst waiting for the start of event I could already see several F-Types racing over the Grand Prix circuit and at the other side of the buildings there was a gathering of a large group of F-Types waiting to be taken on the road. What a sight! Oh and I should not forget to mention, what a sound!!! This was music to my ears…

There was a large group of interested people present at the Jaguar box off the Nürburgring and after some snacks and refreshments a short presentation started about the F-Type. With the car selling it self there was no need for a commercial presentation so the presenters limited themselves to the technique and the pleasure of driving Jaguar’s latest baby.

After the presentation we were split up in two groups and I was lucky enough to be part of the group who would be test driving the F-Type on the road, that way I kept the best for last.

Whilst waiting I took the time to give a closer look at a F-Type in Stratus grey, the version we had bought. Id did not take long before I realized we had made the right decision, however, I could become weak and opt for the Satellite grey one which had a lovely blue shine over it. But then in stratus grey the car looks fantastic! Butch, masculine and in spite of that very classy. Still can’t get over the fact that I will be owning one of these beauties.

Not much later I was given the key of a V-8 version with 495horsepower and slightly trembling I made my self comfortable in this beast. Once I pressed the start button the beast came alive and it presented itself clearly by the sound of the exhaust which sounded like music to me, the party was about to begin.

We almost drove three quarters of an hour over the local roads and you can imagine the smile on my face. It was a beautiful day so I started driving with the top down. What a joy, what passion, what…. I was short for words being overwhelmed by the experience.

The V8 was a true beast and by now I was curious to drive the 340 Horsepower version we had bought. That opportunity came halfway the drive when cars were swapped. I was lucky enough to get the car for myself with no passenger. This time it was just me and the F-Type… At first I was disappointed by the lack of power but quickly realized it was not fair after just having experienced control over 495 horsepower… The car was fast, very reactive to my input and I could hardly focus on the beautiful scenery surrounding me. Who could bother whilst driving an F-Type!

I was enjoying every minute of the drive and several times I thought it was a shame Paul was not there to share the experience. At least he would have been able to tell you how big the smile on my face was that day!

Soon, far to soon for my liking we returned to the Nürburgring for the second and maybe most exciting part of the event. Driving the F-Type on the Grand Prix circuit. We were introduced to a crew of professional drivers who would safely guide us  over the circuit. 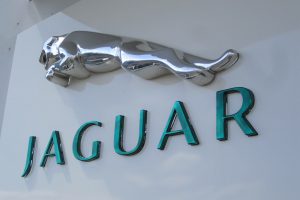 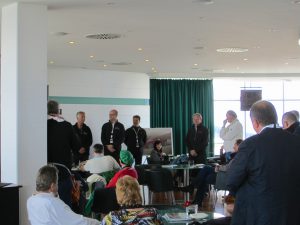 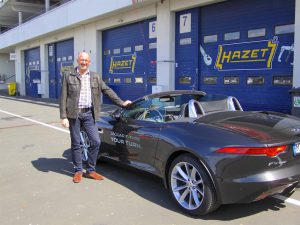 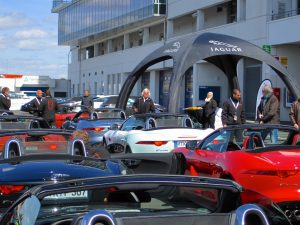 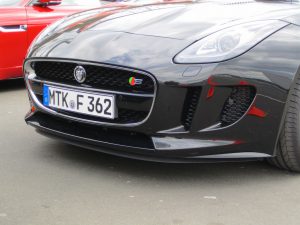 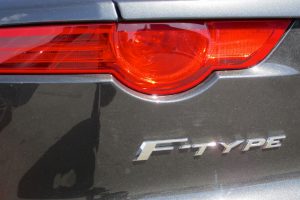 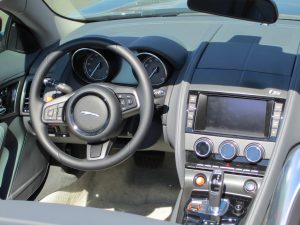 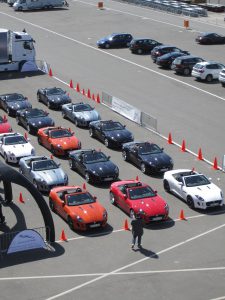 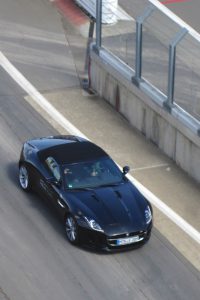 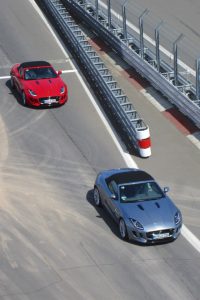 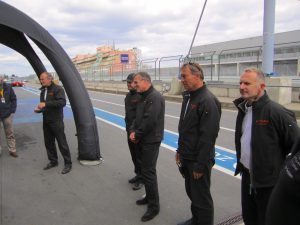 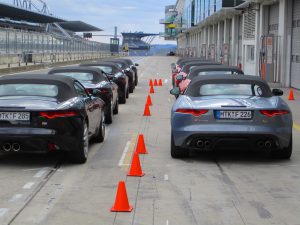 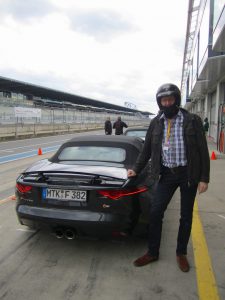 First we got the opportunity to drive ourselves in a “more or less” controlled matter… I entered the F-Type S with 380 horsepower and once everybody was seated the courier gave the start signal and headed off. He was following the best possible driving route on the circuit and all we had to do was try to mimic him and follow the traffic cones.

It was excitement pure and I must admit my language must not have been very politically correct to my fellow passenger when I was taking a curve at far to high speed to what I am used to. On the straight stretches I brought the speed up to 230 kilometers, than a furious break before a corner and fire the F-Type up as soon as we exited the corner. How much fun can one have?

After 5 laps it was time to swap seats and give my fellow passenger the chance to drive himself. I was plaeased to notice that his language was not much better than mine either…

Once back at the pit it was time so speed things up a bit, 230 was hardly an achievement on the GP circuit, although for me it felt different.

We were asked to grab a helmet and take the passenger seat once more, this time with a professional driver mastering the 485 horsepower of a V8 F-Type. A slightly different experience than before…

As mentioned we got the opportunity to drive ourselves in a “more or less” controlled matter now it was time to drop the “more or less” and enjoy the driving of a courier who really took the F-Type to it’s limits… 280 on the straight stretches, full break just before the corner, slide the Jag through it and open the valves again… Perfect control, perfect driving and ehh, did I already mention this? Perfect Car !!!!

What a day it had been, by now I was totally confident we had made the right decision and can hardly wait for our F-Type to be ready for collection in the UK at the end of July… It is for sure a dream coming true.