Originally my flight from Goa to Mumbai was scheduled as an evening flight with a short layover till my next flight to Abu Dhabi. When the evening flight got cancelled however I was rebooked on an early afternoon flight which left me with a 7 hour layover in Mumbai, something I was not particularly looking forward to. I started to look for something to do in that timeframe and initially I wanted to do a street food tour, that was until I came across Slumgods.

Slumgods, a company run and owned by three enthusiastic and motivated young men who were born and raised in Dharavi, Mumbai’s and Asia’s biggest slum. Their mission is not only to show people the positive side of life in the slums, but also to give back to their community by offering hip hop and rap classes to the children of Dharavi.

Although I was hesitant at first I finally decided a trip of the slums would not only be a worthwhile trip to do but also a unique opportunity to get an inside view of the slums. So I booked a private tour with slumgods and was ready to see another side of Mumbai.

After my flight from Goa to Mumbai I went to the exit of the airport where Sagar, my guide, was already waiting for me and he brought a friend, Maze, who was learning to become a tour guide. In the car Ali, our driver, was waiting and so the trip began.

With the traffic being quite decent for Mumbai we headed off to Dhobi Ghat to see the Dhobiwallahs, better known as human washing machines. An amazing amount of laundry from Mumbai’s largest hospitals, hotels and private customers are still washed and dried by hand. An impressive way of labeling the laundry ensures it is returned clean to their owners.

The next stop was Khamatipura, the infamous red light district. Sagar told me the horrendous stories on how young girls and women were brought under false promises to Mumbai and locked in cages until their will was broken and they were willing to work as prostitutes. Going to the police was no option as they were paid bribes to keep the business going. A sad story indeed and obviously I did not make any pictures over here as I did not want to abuse the women more than they already are.

India is a country of extremes as we all know so what better place to see before we went into the slums than Mumbai’s famous 1 billion US dollar apartment called Antillia. A 27 storey high tower block, 3 helipads, hanging gardens and built for India’’s richest man and his family. Still they have not moved in as the building does not comply with certain Indian architectural principles and it would bring bad luck to move in. The contrast of where I was going could not have been bigger.

Before we went to the slums we took a short break at a local cafe opposite the Mahim West railway station which was next to Dharavi. For me it felt more like an afternoon with friends than a tour and I absolutely loved the personal touch that both Sagar and Maze provided, our afternoon together was a real exchange of cultures with questions coming from both sides. 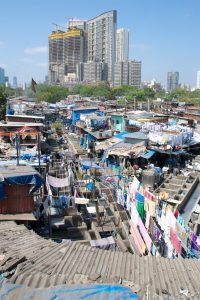 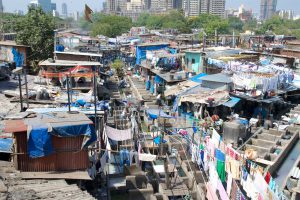 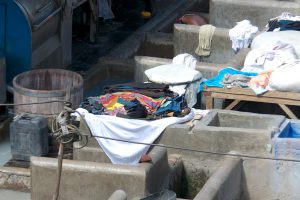 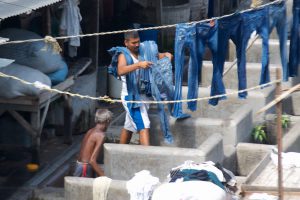 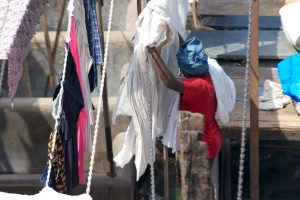 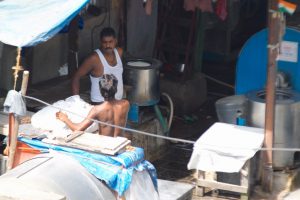 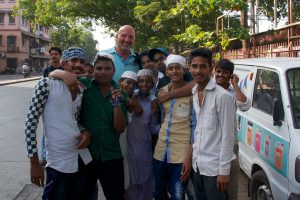 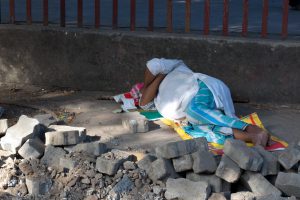 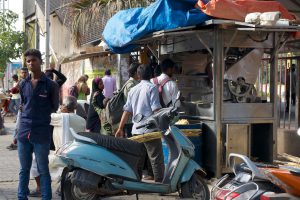 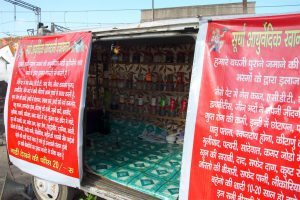 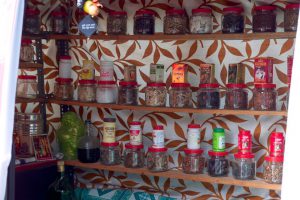 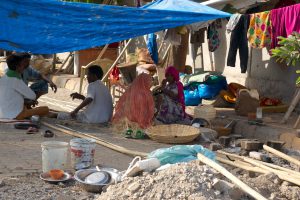 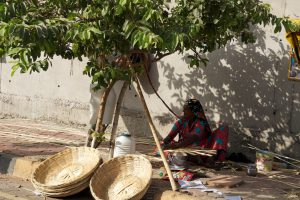 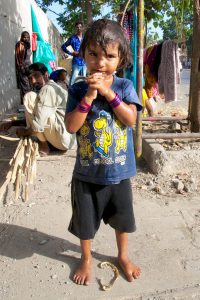 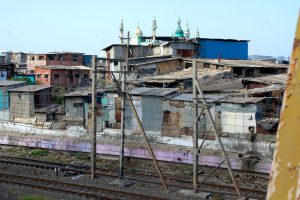 Around the railway station there was the usual activity, the sideways were covered with people preparing the outlet of their shop, hanging around or just having a nap in the middle of the chaotic streets of Mumbai.

Whilst we crossed the pedestrian bridge below us the crowded commuter trains of Mumbai passed by. With 7,5 million commuters being transported on a daily basis I can imagine how it must be like traveling on one of these trains. Unfortunately there was no time to experience that so I have to leave that till another visit.

Dharavi itself is spilt up in several areas and the first part we were about to visit housed the more polluting of industries. There were small factories all built closely together where a lot of recycling was done. Plastic, aluminum cans and so on. All collected from all over Mumbai and being recycled to be the base for a second or maybe even a third life, a good way of re-using all the resources and preventing the earth from being polluted even more than it already is. Every inch of space was used. Not only was I impressed by the amount of people working here, surviving here in harsh conditions, but even more so by the smiles on their faces. It seemed to me people had accepted where they were living and committed to making the best of it. I saw people working hard for many hours a day in what should simply be described not the most comfortable circumstances, all for a few Euros a day of hard earned money to help their families survive.

I felt like having arrived in an ants nest where non-stop activity was surrounding me. Delivering garbage, recycling it into raw materials, washing clothes, and where there was some space left a shop was cramped into where daily supplies were sold.

Both Sagar and Maze made all efforts to show me around and made sure I did not miss anything of what was going on. A dazzling and mind-blowing experience for me to see. They easily found their way through the narrow alleys and made sure I could see all the industrial activity going on and explained the process. I am not sure how healthy some of the recycling activities are for the employees, but staying healthy seems to be of minor importance for those workers who had families to support. In between the recycling areas I could spot small ateliers where mainly men were sewing clothes non stop. They were the lucky ones as they were making more money than the workers doing the recycling and were able to work in a more clean working space. Seeing what was going on everywhere made me feel tremendously fortunate and left me with big respect for all those people working and living here. Leather tanning was another industry to be seen at places and truck loads of animal skins were transported before being tanned in small, hidden away factories.

The two main parts of Dharavi, the industrial part and the residential area were divided by a major street. In a drainage channel I could see some rats moving by, somehow they did not seem shy and have found their way of living in this place where every inch was used by one lifeform or another.

The residential area itself was again split up in three areas. A Muslim, a Hindhu and a Christian area. Although separated by religion I could feel the sense of unity through the neighborhood. We even passed a temple which although being mainly Hindhu had some muslim symbols in order to further show the unity. For me it was an amazing experience when Sagar and Maze led me through the small alleys through the areas which seemed to be developed with only one thing in mind, house as many people in a small area as you possibly can. The houses were small and had no private facilities. In order to make up for that there were communal toilets spread out through the area, facilities I was more than happy to see from the outside but were not inviting enough for further inspection.

Electricity was another amazing aspect over here, more than once I had to bend over to avoid electricity lines hanging over the narrow alleys. I had no idea how it was functioning, how shortcuts were prevented but then somehow, it seemed to come together and work one way or another…

By now, in the heart of Dharavi, I felt very much at ease and was convinced I had made the right decision. With Sagar and Maze around I knew I was having the best experience, even from an outsider’s point of view. They helped me to understand the slums a bit better and instead of spreading doom and gloom and focus on the negative aspects they ensured I felt the spirit that exists in this slum, a spirit of hope, a strong spirit of survival, a spirit of humanity. Yes, it might be a congregation of poverty, a congregation of people who did not have the luck I had myself to be born and raised in a environment where I did have the chance to grow to who I am right now, but that was no excuse for the people to let themselves down. I could feel a sense of pride to make the best of the life that was given to them.

Our last stop was at an area where pottery was made. Once again, all leftovers from the other industries in the area were used to burn and produce the heat required to bake the pots. 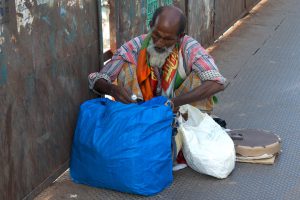 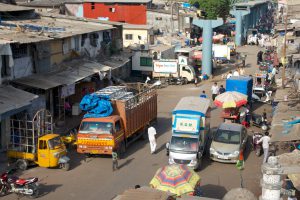 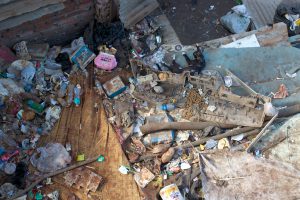 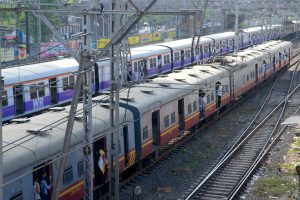 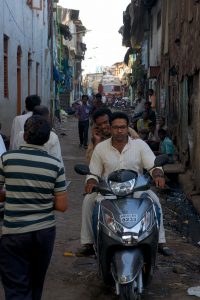 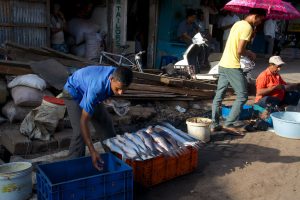 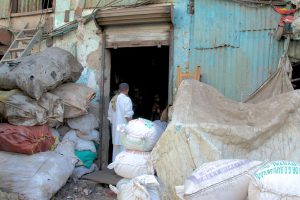 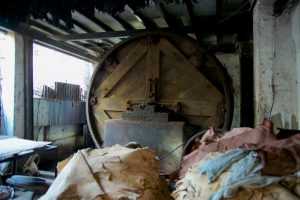 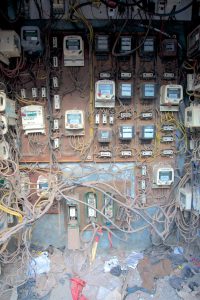 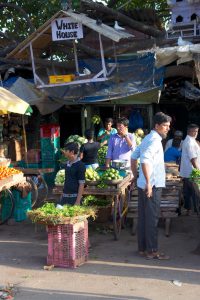 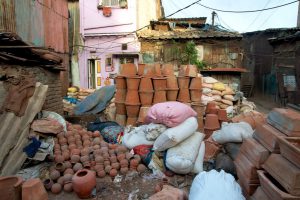 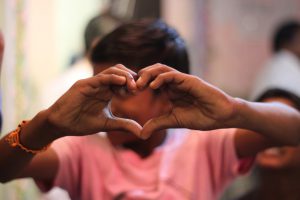 Time was going by fast and somehow I felt I could have spent some more time over here to immerse myself and learn about an area most people avoid during their visit to India. But somehow I felt this was an integral part of India. In order to understand India one should not only visit the Taj Mahal, The Ghat’s in Varanasi or the marvelous palaces in Rhajastan. In order to get to know India, a visit to the slums should be part of the experience. After almost three weeks of total relaxation and yoga in South Goa I was in the right state of mind to experience this other part of India. By the time Sagar and Maze dropped me off at the airport I was speechless and did not know how to express myself. I considered myself extremely lucky to have been able to see and experience a bit of Dharavi. A true eye opener for a wider reality that most of us prefer to ignore. I have experienced the hard working people, the unity but most of all the strong will to survive. Sagar and Maze helped me not to feel sorry for the people but shared the pride of the people born and raised over here.

Guys, I have learned a lot from my visit, thank you for sharing this with me and thank you for this true feeling of friendship, I would not have missed this experience for anything in the world! I will be more than happy to come back, but then, as you offered, as a friend, not as a guest. I could not have wished for a better way of spending my time between two flights. It certainly changed my perspective of India, in the most positive way possible!