Another day and even more traveling. My next destination was Shillong in Meghalaya. As soon as we left Anurachal Pradesh the landscape changed again to flat plains. Roads were much better quality but the monotonous sound of the engine put me to sleep again, I woke up whilst we were crossing the mighty Bramaputhra. Not much later we entered the highway and I managed to sleep once more. At one point we had to swap cars… There were state selections in Meghalaya so it was wiser to drive a car with local license plates…

Meghalaya was once again a very hilly state and it also officially houses the place on earth with highest annual rainfall. I noticed we were close as during lunch I had to move from the terrace to a table inside, as if Meghalaya wanted to make it’s point. We passed a beautiful lake on our way to Shillong and of course made a stop a viewpoint. I could not decide what was the best, the view or all the Indians posing for the countless selfies.

Shillong was the first place on my trip I could not connect with. Houses were cramped on the slopes of the hills and the traffic was horrendous. Perhaps it was the slight rainfall that made the city less attractive, maybe it was the abundance of grey, I could not really point a finger at it.

I checked in at my hotel just after four after which there was not really a lot to do and the last thing I had on my mind was a stroll through the city centre. Wifi wasn’t working, sorry Sir, so instead I enjoyed a black masala tea whilst updating my journal and had a late afternoon nap before dinner at the basil & thyme fine dining restaurant. The name sounded much posher than the place deserved but what’s in a name.

Later that evening I returned to the restaurant and made my choice from the menu. Once again the first couple of items of my liking were not available. What is the use of having an extended menu if half of the items are unavailable. Neither was the Sprite, in spite of the fact that I was told earlier that was the only cold drink available. Ok, a fresh lemon soda then. Sorry Sir… at that time I lost my temper for the first time during my stay in India, told the waiter to cancel my order and left.

Fortunately I found the trendy LightOp Cafe nearby and enjoyed some fried wantans and Singapore Noodles with pork. It was extremely popular with youngsters and I could see how many of them were engaged with their telephones instead of their friends at the same table. How many selfies can one have on your phone? For the girls apparently never enough. With my stomach filled I returned to my room. It was only eight o’clock but as there was nothing else to do…

After breakfast  I discussed the program with Rubul and he told me there was right now not really a big point of going to Cherrapunjee, the wettest place on earth. It’s a 75 km drive one way but the place only really shows is magnificence during the rainy season. 150 kilometers (at Indian speed) just for the sake of having been there was a bit over the top. So I proposed to skip Cherrapunjee and instead visit the Kamakhya Mandir Hindhu temple once we were in Guwahati. And so we did.

But as we drove all the way to Shillong we visited the Shilong peak first. It was a long and winding way but finally we made it till the entrance of an Indian Airforce Base that we had to cross to get to the peak. We had to wait another 15 minutes before the gates opened after which we were told… “Sorry sir, no foreigners allowed, new regulations as of  September the first”. Rubul was embarrassed but I could only laugh, these things happen. 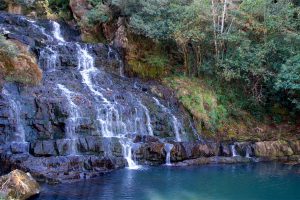 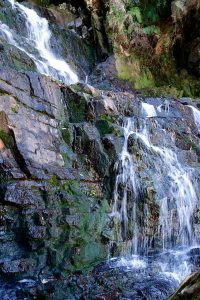 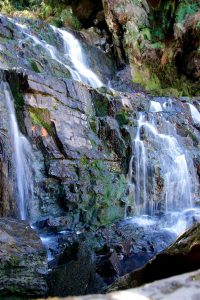 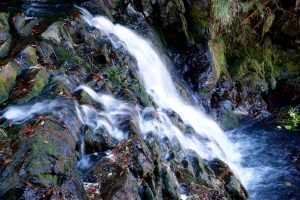 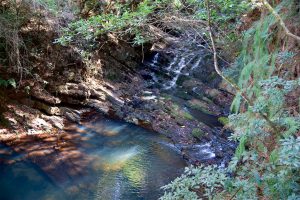 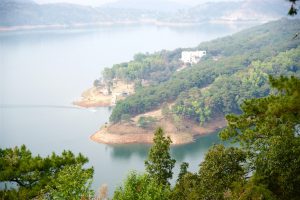 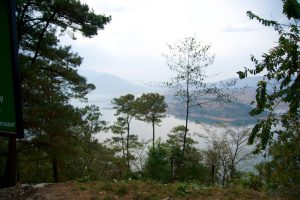 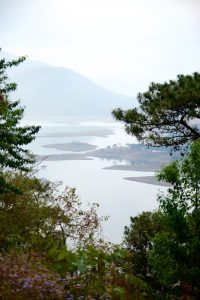 And off we went to the elephant falls, first backtrack the long winding road and then a couple of kilometers further on we arrived at the falls. They were named after a piece of rock that resembled an elephant but unfortunately it was damaged during a 19th century earthquake.

The rock vanished, the cascading falls remained but being there in dry season was not the best time. Still it gave me an opportunity to mess around with my camera settings as I usually do at waterfalls.

But somehow Meghalaya did not have the appeal to me I had hoped for. Maybe my stay was just to short, maybe it was not my thing. Whatever the case, I was not sad to return to Guwahati for my last sightseeing from this part of the tour…

Continue to the Assam Experience