My flight to Kolkata was originally a short one hour flight, but as IndiGo cancelled the direct flight and rebooked me via Delhi it took me all day. In the evening I checked in at my hotel, enjoyed dinner and went for a well deserved sleep.

Next morning I had an appointment with Rohnit Kapoor, a self made business man creating beautiful textiles and garments for upmarket clientele. I had chatted with him several times on one of the Facebook groups pages of India. He had kindly offered to me to skip the tourist ‘crap’ and get an insight of the real Kolkata and he seemed a real nice and genuine person. Initially I hesitated but I could not resist his offer and accepted.

He and Inzamul, his assistant picked me up in the morning and we started the long journey to his house. The trip itself was not that far from North to South Kolkata but the traffic was horrendous. All roads were congested and we seemed to be on hold longer than we were actually on the move. By now I could see for the first time how dirty Kolkata was. Everything was covered by a thick layer of dust, even the plants did not look healthy green.

Every single bit of space was in use. Small shops everywhere, stalls on the pedestrian area’s, and under the slopes of the fly-overs homeless people tried to make some kind of a living. It was a horrendous sight but still I could not be shocked as I more or less had expected it. Rohnit explained a lot of what I saw and gave me an insight of Kolkatan living. Streets are much narrower than Mumbai and Delhi and everything definitely gave a much more cramped experience.

We left the busy streets and drove through a quiet neighbourhood where Rohnit’s house was located. That is where I got the first insight into his work at the sample unit which was created in the garage. Five men were applying embroidery by hand on a piece of fabric. The speed and accuracy were simply amazing.

In the house I was introduced to the family and staff. A welcoming tika was placed at my forehead after which we could relax and was introduced to Bambi, a very friendly boxer, who was treated as a child. Rohnit talked about his work and promised me to take to one of his factories later.

But first breakfast was being served. I was already asked not to have breakfast in my hotel and that turned out to be good advice. Breakfast was simple but made from completely fresh products and very filling.

After breakfast an Uber ride was arranged and we were back on the road again to the city centre. One thing not to be missed in Kolkata was the Victoria Memorial, a beautiful building in a stunningly laid out park. Inside the memorial were several exhibitions of times long gone by.The interior made a faded impression and seemed not well taken care off. Badly constructed alterations did not improve that feeling. The grandeur of it’s glory times were long gone by. It was the first, but also the last touristic sighting I got of Kolkata.

After our visit I was treated on some typical Kolkatan street food, Dani Pushka. It was a hollow crispy pastry which was filled with a mixture of boiled potato and several spices, extremely tasty. Another variety was filled with a spicy brew, very nice too.

In the mean time another uber taxi was called and we drove to one of Rohnit’s factories. It was located in a Muslim area and as hardly any tourists come here (if any at all) I was stared at by everybody. Still the atmosphere was extremely friendly and I did not feel threatened at all.

The “factory” actually was a small workshop in a back room, all on a very small scale. But before we went there we were led to the living quarters of the head of the workshop and his wife. With the lack of a living room we were welcomed in the bedroom and were asked to sit on the bed. Some snacks and a sprite each were brought after which a wonderful biryani was served. Once again the portion was far too big so I put back most of my plate on a serving dish before I started to eat, leaving it untouched so the family could eat it later.

After the meal I was lead to the workshop. The ceiling was extremely low so I had to be careful not to bump my head. Four sewing machines were powered from one central engine (electricity was provided by two cables simply pushed into a power plug). I was given a demonstration how Rohnit’s designs were transferred on a piece of fabric and afterwards got embroided on it. It appeared to be the perfect synergy between man and machine. It was extremely interesting to see how designer dresses and fabrics have their origin in small workshops like these.

Of course we could not leave the apartment block before I was shown some more home industries. Each of the keepers was extremely proud of the work of him and his team and was eager to show it. First a workshop where beautiful leather bags were made. Rohnit was very open about the prices paid for these pieces of art and this time I was shocked. It puts our retail prices in a complete different respective. Just imagine a hand crafted leather bag for 3 or 4 euro or a craft-fully embroided piece of fabric for only 2 euro… But then this was the bottom of the chain and the big profits are made higher up. (By now I saw first hand the total injustice of the system. These people deserve a much fairer price for their hard labour so they can provide their families with a better standard of living).

The last place we visited was a workshop where harmoniums,a traditional Indian instrument, were made. Every single piece of the complete product was carefully put in place by hand, and I was told it takes about four days for one instrument to be completed.

By now it was already dark and we returned to Rohnit’s place were dinner was being served. The friendship and hospitality given to me was simply incredible. One of the staff was sent to a wine shop to get some beer for me. We chatted a while and I did not realise how late it already was, even before dinner was served. As my hotel was at least a 2 hour taxi drive away I was offered the master bedroom to stay overnight. It was already past eleven so staying at the place of my host seemed the most reasonable option.

I slept well that night, next morning I was woken up by the noise from Bambi scratching the door, he wanted to come and visit me. Finally he was allowed in and I could sense his happiness I was still there. 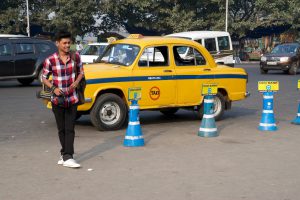 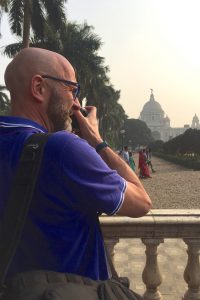 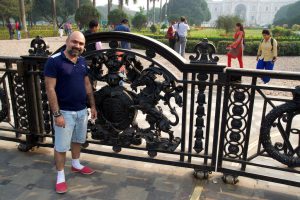 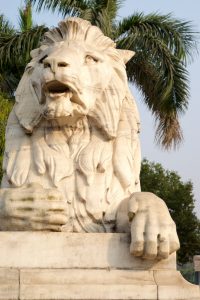 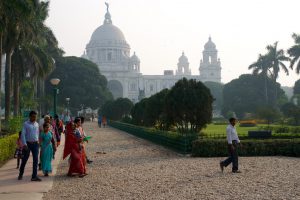 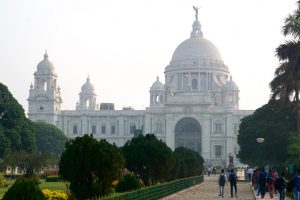 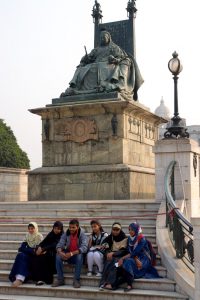 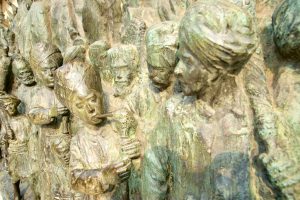 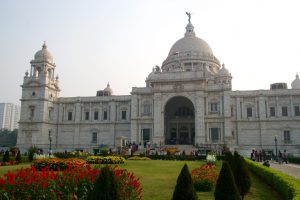 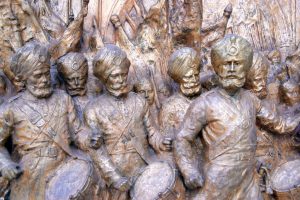 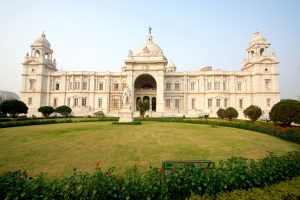 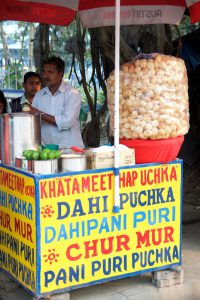 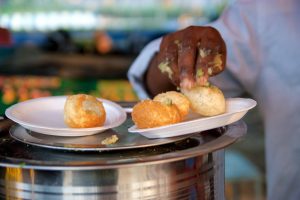 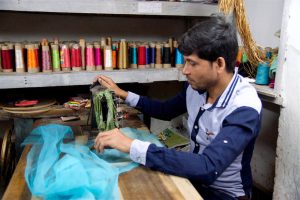 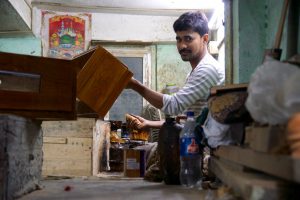 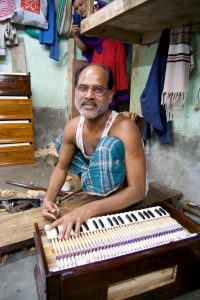 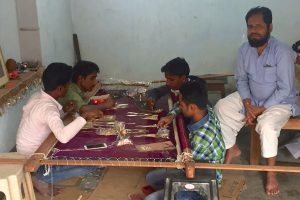 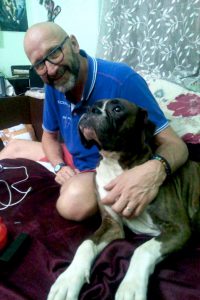 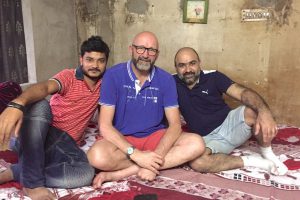 Rohnit had to finish some business at the bank so I was left behind with a nice cup of black coffee. This of course, like all things, in Kolkata took longer than the five minutes planned. Around noon we had breakfast and I tasted some fish that the maid had especially prepared for me.

Around 13:30 I said goodbye to everybody and Rohnit and Inzamul  escorted me back to my hotel. It took us about 2 1/2 hour to get there, in spite of it being Saturday the congestion seemed not any less than on a weekday.

One pair of eyes was simply not enough to soak up everything that I saw. And there was plenty of time to watch as once again we were standing still longer than actually driving. At the hotel I did not know how to thank Rohnit and his assistant. A random Facebook encounter and some friendly chats ended up in an invite to get shown the real Kolkata. An invite that had blown me away. The friendship and hospitality shown were second to one. It was an extremely humbling experience, something one will not come across very quickly in the west. But then this was India, a country that never stops to surprise.

I might have arrived at my destination but Rohnit and Inzamul still faced to long dreadful journey back home. Earlier he had refused to let me return to the hotel on my own but insisted to escort me all the way. Another amazing sample of his profound hospitality.

A shower later I moved to the restaurant for a refreshing mock tail and update my journal. I was getting already tired by now but had to wait till 19:00 till dinner was served. That evening was a very early night as I had to get up early again.

Continue to The Sundarbans Experience