On the 4th of September I had to wake up at an unearthly time so I could catch the 6 o’clock train to Schiphol airport. In spite of the almost inevitable delay I made it in time for checking in and not much later we were air born. Four movies and almost thirteen hours later we touched down in Singapore where I made my way to another terminal from where my plane to Bali departed.

Two hours and forty minutes later I landed on Bali International airport passed the custems and picked up my luggage. I made my way to the national terminal, had to wait for some hours (during which I enjoyed my first kretek cigarette) , one more flight and I arrived in Malang, my first destination of this trip.

Yus and Ayu, my friends from Java Travel, were already waiting for me and they brought me to Ijen Suites, a luxury hotel in Malang.

After I had a refreshing shower I went to see them again and chatted for a long time. It was so nice to meet Yus again and finally get to know Ayu his new business partner after Sri got married and moved to the Netherlands. Instead of going to town we moved to the 11th floor from where we had a breathtaking view over Malang and had dinner over there.

At several places we could see fireworks lighting up the sky, and somehow it felt like a celebration of the reason I returned to Malang once again.

It was a wonderful evening and I could hardly believe I made it till after ten, in spite of my long journey and lack of sleep. But it was such a nice evening I hardly noticed my tiredness. But finally it caught up on me so I said good night and went for a long and deep sleep.

Next morning I did not hear the alarm but still woke up in time for a quick shower and a large Indonesian breakfast. Yus and Ayu came to greet me and then it was time for the reason I decided to come to Malang in the first place.

70 years ago my father was in Malang during the Indonesian independence war, this is, in spite of the rough times, when he developed a deep love for this mesmerizing country. He transferred his love to me and in 2008 the both of us travelled to Java and Bali together in order to unite two worlds.

Indonesia always was a part of him and after he passed away last year we decided he should become a part of Indonesia.

We drove to Alun Alun, a central square in Malang that has now been converted into a beautiful park. Even more important, Toko Oen and Hotel Pelangi, two of the places my father loved to hang out with his fellow officers during the time of war were adjacent to it. I could not think of a better place for what I was about to do.

Ayu and myself walked around the park and not much later Yus joined us. We found a beautiful spot at one of the large banyan trees that were planted in the park and I knew I found the perfect place to leave the ashes of my father behind.

I placed a picture of him in the trees, greeted my family (Ayu was filming the ceremony) and then spoke to my father one more time.

His time in Malang had shaped my father for the rest of his life. He spoke about it countless times, sometimes he bored us with the same old stories over and over, but at the same he did manage to transfer his love for Indonesia to me. Without him I would not have explored this beautiful country on so many of my adventures.

Today it was time to bring him back, something I felt was my duty, but something that made me feel extremely proud and accomplished. What a beautiful thing to do, and if my father would be aware of this one way or another I am sure he would look back at me with a big smile on his face.

After a short speech I shattered his ashes into the tree and placed his photo on a more secluded spot above the spread out ashes. One final greeting, one final terimah kasih banyak (thank you) and I turned around and left him behind. The circle was round. I put his picture deeper into the tree, into a sheltered area and felt sad in a way but also very accomplished, it had been the right thing to do.

Yus, Ayu and myself went to Toko Oen and had something to drink to celebrate my father’s life. Many happy memories of the time we spent during the journey in Java came back. Yus had an amazing memories and revived many memories I had somehow not thought about  anymore. What a beautiful morning it had been.

Then we moved to another beautiful restaurant which was home of many old artifacts from times long time gone. A true revival of Tempoe Doeloe (referring to old colonial Indonesia). What a place, it just blended in perfect with the whole day. We ordered several items from the menu and shared them together.

The rest of the afternoon we stayed there chatting and enjoying each other’s company. It was a brilliant afternoon. But my tiredness was catching up with me so we returned to the hotel where I had a shower and a short nap.

Later on in the evening the both of them returned to pick me up and we went to a restaurant for another exquisite dinner. When it comes to good food Yus certainly knows where to go. Once again we selected a number of dishes to share. The only problem with Indonesian food is that it is so extremely good, I had 3 full plates, my eyes wanted more but my stomach said please no…

Another great evening, there was so much to talk about we did not realize time was going by fast. The restaurant was closing down and we got a vert friendly gesture to pay the bill and leave. We were the last guests to do so that night.

Back at the hotel I had one final bintang, updated my journal and called a day. An emotional day but it could not have made me feel better. I could not have thought of a better way to honor my father and was extremely proud I was able to do it this way. It was perfect, the circle was round…

That night my jet lag was really playing games with me, although I was tired I was laying restless in bed and did not fell asleep till after 03:00 am..

Still I was woken in time by the alarm, had a refreshing shower and another great Indonesian style breakfast. If things go on like this I really need to go on a diet once whole but I can worry about that later.

Yus and Ayu showed up around ten and we decided to return to Inggil Resto in order to work on their website. The last update was from early 2017 so it was time to spice it up and bring it up to date. We spent the whole morning on that and discussing business issues. I was extremely happy I was able to support them after all they did for me. After all they drove 8 hours from Yogyakarta and made all arrangements for me in Malang which made it possible to shatter my father’s ashes over here, something I will never forget. It was a very pleasant and productive morning. 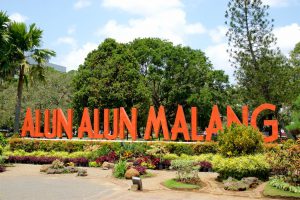 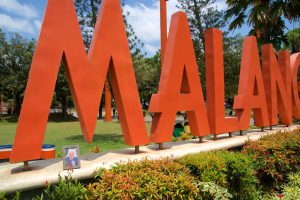 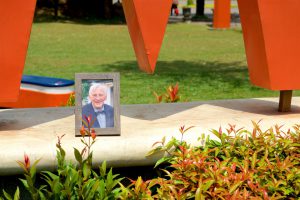 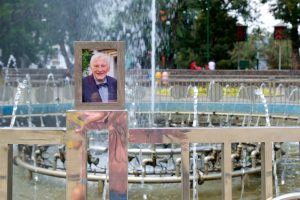 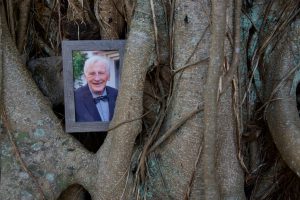 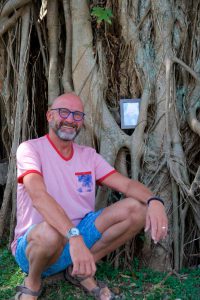 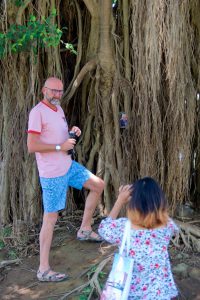 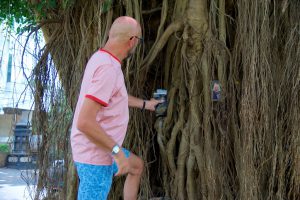 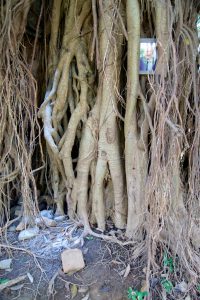 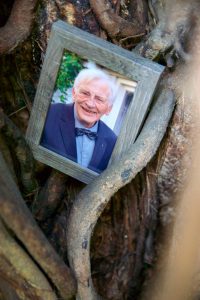 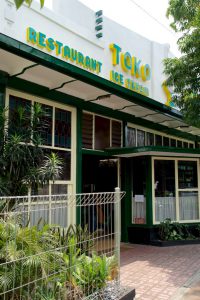 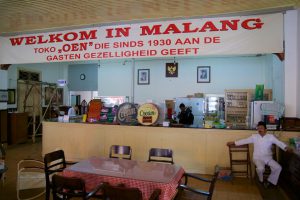 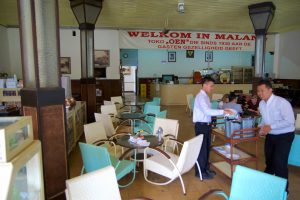 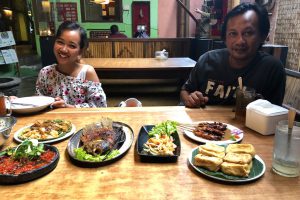 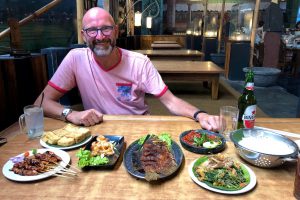 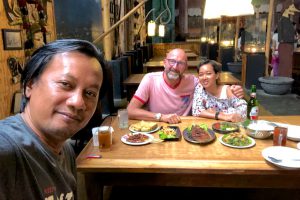 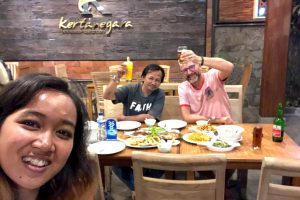 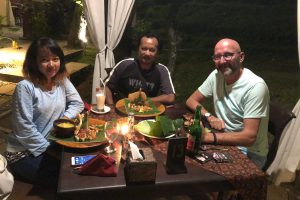 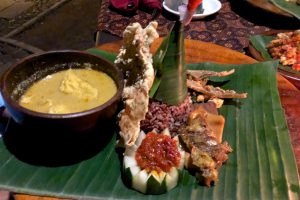 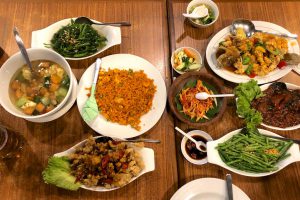 After we finished working we enjoyed lunch at Inngil Resto, had a nice chat with two other travelers after which Yus and Ayu dropped me at to hotel.

Instead of relaxing at the pool I fell asleep in my room and enjoyed a long, much needed sleep. The alarm woke me up again in time for our final dinner in Malang. Yus and Ayu had done some research and so we went to Taman Indi Resto where we got lucky to get a table at the riverside and once again food was amazing.

The evening was perfect and it seemed nothing kept us from chatting on, that was until the waiter present us the bill. Once again we were the last guests to left.

My trip to Java is coming to an end. The next day I flew to Bali for the second part of my trip.

It was a short trip, a bitter sweet trip. Still it was perhaps one of the proudest moments in my life. Bringing the ashes of my father back to a place that shaped him for the rest of his life was such a beautiful thing to do. Indonesia has always been a big part of him and now he is part of Indonesia.

The circle was completed and I feel accomplished. When I look back at the event I still get tearful but this time it are tears of joy. It is something that I will carry with me for the rest of my life.

It goes without saying this all was done with great help of Yus and Ayu. Their friendship, their generosity and their efforts were second to none. They once again showed me the true spirit of the Indonesians where friendship is written in capital letters.

Continue the journey to Bali